An Introduction to Hive

Apache Hive is a data warehouse infrastructure built on top of Hadoop for providing data summarization, query, and analysis. HiveQL, which is an SQL-like language provided by Hive, provides a mechanism to project structure onto the data and query the data. Also this language allows traditional map/reduce programmers to plug in their custom mappers and reducers when it is inconvenient or inefficient to express this logic in HiveQL.

The figure below shows the major components of Hive and its interactions with Hadoop.

The main components of Hive are: 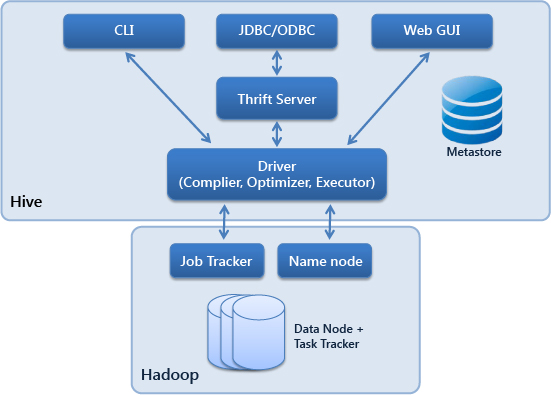 The UI calls the execute interface to the Driver as shown by the step 1 in the figure. The Driver then creates a session handle for that query and sends that query to the compiler to generate an execution plan in step 2. The compiler then gets the necessary metadata from the metastore(steps 3 and 4). This metadata is used to check the expressions in the query tree as well as to prune partitions based on query predicates. The plan generated by the compiler (step 5) is a DAG (directed acyclic graph) of stages with each stage being either a map/reduce job, a metadata operation or an operations on hdfs. For map/reduce stages, the plan contains map operator trees and a reduce operator tree. The execution engines submits these stages to appropriate components as shown in steps 6, 6.1, 6.2 and 6.3 steps. In each task (mapper/reducer) the deserializer associated with the table or intermediate outputs is used to read the rows from hdfs files and these are passed through the associated operator tree. Once the output is generated, it is written to a temporary hdfs file though the serializer (this happens in the mapper in case the operation does not need a reducer). The temporary files are used to provide data to subsequent map/reduce stages of the plan. For DML operations the final temporary file is moved to location of the tables. This scheme is used to ensure that dirty data is not read. For queries, the contents of the temporary file are read by the execution engine directly from hdfs as part of the fetch call from the Driver (steps 7, 8 and 9). 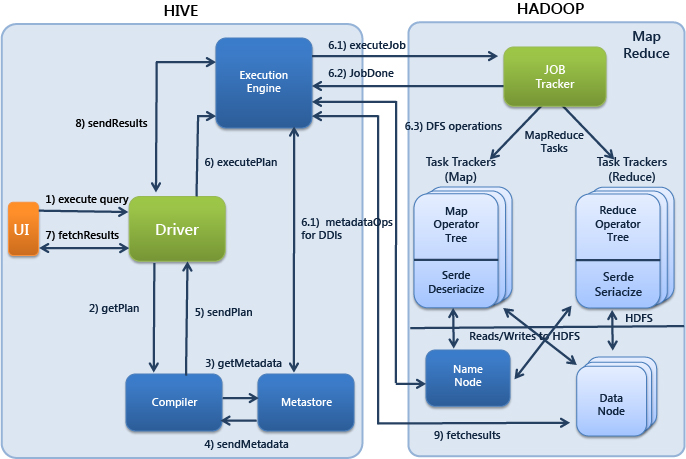 The figure above shows a typical flow of query through the system.

Hive Data Model- Date in Hive is organized into the following:

Difference between Hive and RDBMS

Schema on Read vs. Schema on Write: