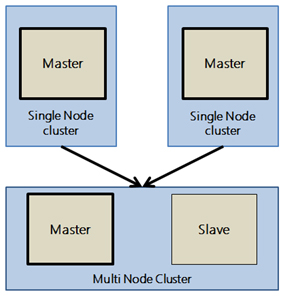 This document describes the steps needed to set up a distributed, multi-node Apache Hadoop cluster. The proper approach would be a 2 step approach. First step would be to install 2 single-node Hadoop machines, configure and test them as local Hadoop systems. Second step would be to merge both the single-node systems into a multi-node cluster, such that one Ubuntu box is designated as a Master and the other Ubuntu box as a Slave only. The Master would also act as a slave for data storage and processing.

There are certain required steps to be done before starting the Hadoop Installation. They are listed as below. Each step is further described below with screenshots and commands for additional understanding.

Hadoop requires an installation of Java 1.6 or higher. It is always better to go with the latest Java version. In our case we have installed Java 7u-25.

Once the single-node Hadoop clusters are up and running, we need to make configuration changes to make one Ubuntu box as a “ master” (this box will also act as the slave) and the other Ubuntu box as the “slave”.

Networking plays a major role out here. Before merging the servers into a multi-node cluster, make sure that both Ubuntu boxes are able to ping each other. Both the boxes should be connected on the same network/hub so that they can speak to each other

There are certain required steps to be done for the Hadoop multi-node setup. They are listed as below. Each step is further described below with screenshots and commands for additional understanding.

There are some other configuration options worth studying. The following information is taken from the Hadoop API Overview.
In file conf/mapred-site.xml:

Formatting the HDFS filesystem via NameNode

The first step to starting your Hadoop installation is the formatting of the Hadoop file system (HDFS) implemented on top of your local filesystem of your cluster. This step is required the first time you set up a Hadoop cluster. Do not format a running Hadoop filesystem as you will lose all the data currently in the cluster (in HDFS)!

To format the filesystem (which simply initializes the directory specified by the dfs.name.dir variable), execute the following command in the $HADOOP_HOME/bin directory. 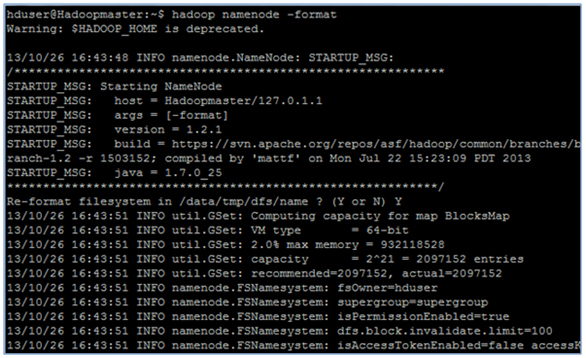